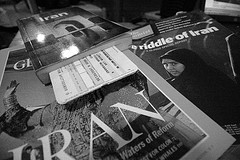 United States (U.S.) national security policy towards Iran is a complicated policy that has drastically changed throughout history. In providing the history of U.S. and Iranian relations the complex nature of involvement will become apparent. Once a history has been provided, there must be an analysis of the current U.S. interest in Iran. What factors warrant a U.S. strategy towards Iran?  Are there economic or political interest? After the current U.S. interests are exposed an explanation of current U.S. policy must be provided. Is U.S. policy entrenched in creating difficulties for the Iranian government or is there more of an open diplomatic dialogue? In examining the U.S. national security policy towards Iran there must be the inclusion of what problems within Iran can have an impact on the U.S. Are there environmental concerns? Once all of these points-of-interest are discussed it will be shown that U.S. national security policy towards Iran is aimed at reducing the damage of a tyrannical government and increasing benefit and safety to the U.S.

The U.S. has a very complicated relationship with Iran. Up until 1979, Americans and Iranians shared many common interests. Early in the twentieth century, Iranians were determined to promote democracy in the Middle East. In between World War I and World War II the U.S. and Iran were involved both commercially and politically. During the Cold War, the United States had a mutually beneficial alliance with the Iranian government (ruled by the Shah); a government that helped to modernize Iran and make it an important country in relation to the rest of the world. By the mid-1970s the U.S. and Iran shared a bond, especially in business and education. Over two hundred thousand Iranian students were studying in the U.S. during this period. Under the guidance of the Shah, the Iranian people wanted a strong economy, social freedoms, and democracy. This growing relationship between the U.S. and Iran would start to falter beginning in 1979 (Morgan et al.). The two main reasons for the severance of the relationship are due to the American hostage crisis in Iran and the fall of the Shah during the Iranian Revolution. The Iranian hostage crisis occurred when Iranian students stormed the U.S. embassy in Tehran and held forty-two American diplomats hostage for four hundred forty-four days. This is an incident that the Iranian government has never apologized for to the American people. After the fall of the Shah, a U.S. ally, Iran was run by a new Islamic leadership. The new leadership has continued to avoid democracy, human rights and to pursue nuclear ambitions and harbor terrorists. Through the seizure of the U.S. embassy, Iran’s hard-liners were able to seize control of the government. Along with the seizure of the government came the end of the democratic future that the Iranian people sought. At this time, Iran’s international reputation and relationship with the U.S. was destroyed. The strain between the U.S. and Iran was heightened when Iran began to support terrorist activity against the U.S. through organizations such as Hezbollah during the 1980s. In spite of the U.S. and Iranian governmental relations, the U.S. still has a connection with the Iranian people. The U.S. has naturalized several thousand Iranian immigrants. These immigrants provide a significant contribution to American society. Even though U.S. and Iranian diplomatic relations have been severed, Iranian-Americans still have ties to their native country and hope for a more democratic future for Iran. Most Iranians today have no personal experience with the Iranian Revolution. Having lived under the hard-line regime, many Iranians of the new generation are renewing democratic interests that were present under the Shah’s rule. By the late 1990s, Iran appeared to be heading towards reform despite hard-liner opposition. However, the hard-line regime has continued to maintain control over Iran through the use of its security forces, judiciary, and the suppression of its critics. This has shown a clear struggle between the Iranian government and the majority of the Iranian people. In the current era, Iran’s government has continued to hold a position at odds with most of the international community. This includes pursuit of nuclear weapon capability, support of terrorists, and a disregard for human rights. (Burns)

Another main interest the U.S. has in relation to Iran is access to Persian Gulf oil. The economic well-being of the U.S. and the rest of the world are dependent on the supply of fossil fuels. Iran is of major U.S. interest in this area considering that it holds approximately nine percent of the world’s oil reserves and sixteen percent of the world’s natural gas reserves. The U.S. is heavily dependent on fossil fuels, but must also be concerned about energy resource accessibility of its major trading partners. Occurrences of incidents, such as the Iranian Revolution, can have severe international economic repercussions. (Hamilton, et al., 13-4)

Geopolitical interests are also of concern to the U.S. in relation to Iran. Iran’s geographic and political factors have great influence in the region. Iran can contribute to the stability of former Soviet states in the Caucasus Mountains and Central Asia by providing an economic hub for its imports and exports. Iran’s military action on the eastern border with Afghanistan can help dissuade narcotics trafficking; stopping the flow of narcotics into European markets. Iran can play an important role in respect to Pakistan and India as a potential balance in the region and a transportation route for energy supplies. Russia and China have also shown interest in Iran due to its regional power and strategic location. Many of these attributes in relation to Iran are of great interest to the U.S. (Hamilton, et al., 7)

The U.S. policy towards Iran is focused on expelling the unfavorable practices of the country. Some of these unfavorable aspects are: a tyrannical regime, support of terrorism, nuclear proliferation, disregard for human rights, and many other practices in an unending list. U.S. policy to thwart the unfavorable Iranian position includes: regime change, economic sanctions, and military containment.

Regime change within Iran is an active component of U.S. policy. There are several U.S. officials that believe that only a regime change will permanently reduce the threat created by Iran. Throughout the last thirty plus years the U.S. has provided funding to anti-regime groups. The current Administration’s interest in regime change became apparent after the September 11, 2001, attacks when President Bush included Iran as part of the “axis of evil.” More recent indications of the U.S. preference for regime change have included public criticism of the Iranian government’s human rights record. The U.S. has also implemented diplomatic missions around Iran to help facilitate U.S. democracy promotion programs. (Katzman, 29-30)

Economic sanctions have become part of the U.S. policy towards Iran. This policy aims to eradicate terrorist activity and nuclear proliferation. Iran has been included on the U.S. terrorism list ever since 1984. This designation bans any arms sales or direct financial assistance from the U.S. to Iran. In addition, being on the terrorism list, any other country that assists Iran in any of the previously mentioned efforts is penalized by the U.S. Proliferation sanctions have also been imposed on Iran. These sanctions also impact any foreign entities that assist Iran in any weapons-of-mass-destruction (WMD) programs. (Katzman, 9)

U.S. policy has focused on containing any military threat posed by Iran to the U.S., U.S. allies in the Persian Gulf, and international shipping. It has been mentioned that military action in Iran could become a reality if the President decides it is necessary. U.S. encounters with Iranian naval vessels have been less than cordial in the past. It has also been mentioned that U.S. military containment against Iran may change in the after the Iraq war. However, U.S. military containment against Iran is a current U.S. policy. (Katzman, 13-4)

V. Iran: Problems and Issues That Could Impact the United States

There are many problems and issues in Iran that could potentially impact the U.S. Some of these issues and problems include: environmental, weapons development, and Iran’s attack on the U.S. dollar.

In addition to deforestation and desertification issues across much of Iran’s territory, overfishing in lakes and rivers has caused a drop in fishing levels; industrial and urban waste water runoff has contaminated a number of rivers and coastal waters and threatened drinking water supplies; wetlands and reservoirs are increasingly being destroyed under the pretext of creating agricultural and industrial lands; and oil and chemical spills in the Persian Gulf and Caspian Sea continue to pollute the seas and harm aquatic life. (Energy Information Administration)

If these environmental concerns are not addressed they could have an impact on the U.S. and the rest of the world; environmental issues are never a one-country problem.

Iran’s development of weapons is another issue that could have an impact on the U.S. Threats against the U.S. by Iran, joined with advances in their nuclear weapons program, support for terrorist organizations, and international diplomacy are examples of the security threat Iran imposes. Iran has conducted a clandestine uranium enrichment program. The U.S. Director of National Intelligence is concerned that Iran will be nuclear capable sometime within the next decade. There are also speculative concerns about further capabilities of Iran in relation to weapons production:

Iran provides funding, training, weapons, rockets, and other material support to terrorist groups in Lebanon, the Palestinian Territories, and elsewhere.

Elements of the Iranian national security apparatus are actively supporting the insurgency in Iraq. (U.S. House of Representatives, 4)

All of the facts and scenarios pose an immediate threat that could have great impact on the U.S. Iran seems capable, or close to being capable, of supporting or carrying-out an operation of mass proportions to the U.S. The rift between the U.S. and Iranian government is deep and long-standing which increases the possibility for disaster.

Another problem that has an impact on the U.S. is Iran’s financial decisions that have an impact on the value of the U.S. dollar. Tehran has decided to end all oil sales in dollars. The willingness of other major oil customers, such as China and Japan, has expressed their willingness to buy oil in currencies other than the dollar. This creates even more problems for the U.S. dollar. For example, China has one trillion dollars in foreign reserve holdings, but has now stated that it will no longer accumulate reserves. Nearly seventy percent of the one trillion dollar holdings were in U.S. dollar assets. The demand from Iran for their customers to purchase oil in currencies other than the dollar will have a great impact on the U.S. federal budget and the value of the U.S. dollar. (Corsi)

The U.S. national security policy has devised a strategy for thwarting the evil efforts of the Iranian government; efforts which pose a threat to the U.S. The policy also aims to benefit the U.S. and her allies. Some of the interests to the U.S. towards Iran include the preservation of Israel, access to Persian Gulf oil, and the power of Iran within the region. U.S. policy towards Iran plays an aggressive role. The U.S. has made it clear that it would prefer a regime change believing that will be the only way to reduce threat. The U.S. has also imposed several economic sanctions in an effort to reduce Iran’s involvement with terrorist organizations and nuclear proliferation. The U.S. has chosen a containment policy for the Iranian military to weaken any military threat. There are many problems and issues within Iran that have an impact on the U.S. Iran has critical environmental issues which could impact the U.S. Iran’s weapon’s development programs provide the possibility of Iranian sponsored terrorist attacks against the U.S. Iran has also posed an economic impact on the U.S. by facilitating the devaluing of U.S. currency. For all of the confrontational positions Iran takes towards the U.S., the U.S. must be prepared for the threat imposed through a strong national security policy.