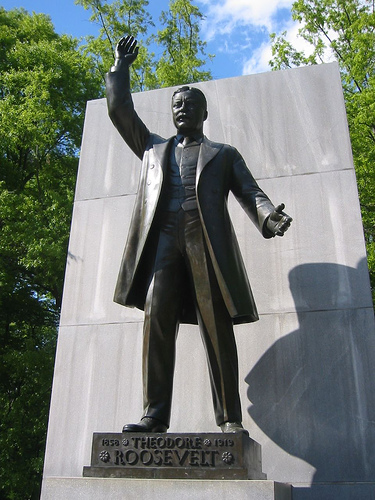 Theodore Roosevelt was born on October 27, 1858 in New York City. Theodore’s parents were Theodore Roosevelt, Sr. and Martha Bulloch Roosevelt and he was the second oldest to four siblings. In Theodore’s early years he was affectionately, and partly to establish is own name aside of his father, referred to as “Teedie.” Theodore’s lineage originates in Holland (on his fathers side) and Scotland (on his mothers side). Without going into to much detail about Theodore’s family, as I intend to focus on him for the purposes of this paper, it is important to understand that he came from families of wealth and connections. The Roosevelt’s earned their fortune by operating a hardware and industrial glass firm and land holdings in and around New York City while the Bulloch’s were slave owning plantation owners in Georgia. Theodore was very sick as a child as he suffered from asthma and numerous other ailments. Due to his ailments he was confined indoors which led to his early education consisting entirely of private tutoring. His confinement indoors also spawned an interest in journal writing of his thoughts, feelings, and experiences which endured until his dying day. Constantly being inside, a strong relationship grew between Theodore and his father in which he inherited a strict moral conscience. This conscience persisted for the rest of his life and Theodore evaluated his experiences through his sense of morality; he saw things in terms of right and wrong. Theodore, Sr. built his son a small gymnasium in their family mansion for him to improve his strength. In addition, he also took boxing lessons. This training eventually contributed to Theodore’s asthma subsiding and his strength growing. In 1876, Theodore was eighteen and entered Harvard College. He had a rocky start his first year, but his second year’s grades were met with honors. He originally wanted to become a scientist, but decided that was not for him. Theodore was well liked by his peers at Harvard. He was invited to join the prestigious Porcellian and Hasty Pudding Clubs, became president of Alpha Delta Phi, vice-president of the National History Society, joined the glee club, was a member of the Class Committee, edited The Harvard Advocate, a member of Phi Beta Kappa, taught Sunday school every week, and was on the Harvard boxing team. His classmate gave him the nickname “Teddy.” An interesting side note to this fact is that the children’s toy bear, known as the “Teddy Bear” was conceived through this former Presidents nickname. Teddy, as he will be referred to for the remainder of this paper, graduated from Harvard in 1880.

After graduating from Harvard Teddy attended Columbia Law School which he did not find inspiring. While studying at law school he found other things of more interest to him to abide his time during which he authored the book entitled The Naval War of 1812. After his first year in law school he was presented with the opportunity to run for New York State Assemblyman. Teddy’s disinterest in law school motivated him to grasp this opportunity. This decision resulted in his election to the New York State assembly in 1882 which was the first position that contributed to his political path. As an assemblyman he aligned his loyalty to the Republican Party which was questionable when he advocated Democratic governor Grover Cleveland presidential candidacy and opposed James G. Blaine at the Republican convention in 1884. In 1884, Teddy’s wife of four years, Alice Hathaway Lee, died giving birth to their daughter named Alice. Teddy’s mother also died of typhoid fever on the same day of his wife’s passing. Grieving, due to his losses, Teddy decided to purchase two cattle ranches in the Dakota’s. He aimed to lift his spirits through physical activity. Although he ultimately failed as a rancher he authored three more books during this two year period. During 1886 he returned to New York City and ran an unsuccessful campaign for the mayor’s office which he lost to Democrat Henry George. Teddy also remarried in that year to a childhood friend named Edith K. Carow. For the next couple of years he settled with his wife and children and continued to write. Then in 1889, Teddy returned to public life accepting an appointment to the U.S. Civil Service Commission. Teddy’s service was appreciated by his friend Grover Cleveland, who was to become the next President, and he appointed Teddy to another term with the commission. In 1895, Teddy became the Police Commissioner of New York City. During time as commissioner he unsuccessfully fought against police corruption, but gained popularity by heading nighttime patrols to make sure the police were doing their jobs. In 1896, Teddy campaigned for Republican presidential nominee William McKinley. After the successful election of McKinley, Teddy pressed for an appointment which he got a nomination to be the assistant secretary of the Navy to add to his political achievements. In May 1898, the war against Spain had been declared. Teddy resigned as the assistant secretary to join a volunteer cavalry. His adventures with the “Rough Riders” which were reported in the press made him a national celebrity. In an effort to capitalize on his popularity, Teddy ran for governor of New York in which he was elected by a narrow margin. During his time as governor he alienated his political boss Thomas Platt. In 1900, Platt and other Republicans urged President McKinley to take Teddy as his running mate considering the previous vice-president had died in office and Platt was eager to be rid of Teddy. Teddy quickly realized that he was not a favorite with the Republican Party and his only chance for presidency would be to gain exposure on a national ticket, so he accepted the offer to be McKinley’s running mate. Teddy’s vice-presidency was cut short due to McKinley’s assassination in September 1901 which led him to his first term as President. During Teddy’s first term he gained a reputation for trust-busting. This was his attempt to regulate large corporations, not to destroy them which was misunderstood by a few. He also won approval for forcing arbitration during the coal strike of 1902. In 1904, Teddy’s main challenger for Republican nomination, Mark Henna, died before the convention and helped the incumbent. He campaigned under his “square deal” for all American people and won in November. He later regretted his success and announced he would not seek nomination in 1908; which basically attributed to his self labeling as a lame duck. Teddy’s second term was met with slow domestic progress and congress was sick of his activism and resisted many of his proposals. Progress was made in conserving the nation’s resources, but the President was blamed for contributing to the onset of the panic of 1907. Teddy was active in foreign affairs in his quest for the Panama Canal and his services in settling the Russo-Japanese War for which he received a Nobel Peace Prize. The Republican Party respected Teddy’s earlier decision not to seek nomination and in 1908 gave nomination for a new President (William Howard Taft).

After the white house Teddy was an active former President. He immediately set out for a ten month African safari. He then traveled to Europe and the Middle East not to return to the United States until 1910. Enjoying his retirement Teddy was reluctant to reenter politics. However, he was unhappy with Taft’s disloyalty and abandonment of progressivism. In 1910, the former president gave an address in Kansas outlining the New Nationalism and separating his brand of progressivism from Taft’s. In 1912, Teddy declined interest in receiving a Republican nomination but reconsidered. However, when the convention was held Teddy’s challenge would be defeated by the political pros serving the incumbent Taft. So, Teddy formed the Progressive Party also nicknamed Bull Moose Party for comments made to a reporter regarding his current health. Woodrow Wilson, a Democratic governor, would be the victor over the fatally split Republicans, but Teddy took satisfaction in finishing ahead of Taft. Following defeat, Teddy wrote his autobiography and traveled South America. While in South America he contracted a severe case of malaria. Teddy’s relationship with the Wilson administration was not friendly and in 1916 half-heartedly campaigned for the opposition. In 1917, as America entered conflict Teddy pursued a position for military command, but was denied. By this time Teddy was no longer the man he once was, he had been blinded in one eye during a boxing match with an aide several years earlier (but never mentioned it), was deaf in one ear, and considerably weakened by the effects of his malaria. Teddy died shortly after in 1919 and was buried, without a ceremony, at Sagamore Hill (his home).

In conclusion, Theodore “Teddy” Roosevelt was an extraordinary man who led an extraordinary life. He was rich with character and an advocate of letting his moral conscience guide his decisions; what’s right is right. His early life, political path, what he did beyond the white house, and the things he is most remembered for consist of so many achievements it should be inspiration to all of us on how much we are capable of doing if we are motivated.