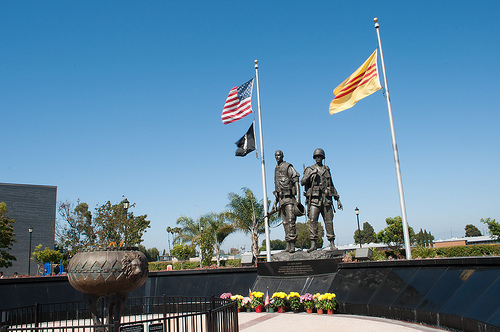 Tim O’Brien wrote a series of gripping individual stories that were combined to create one book: The Things They Carried. This book recreated the emotion of a Vietnam War draftee before, during, and after the war. In a closer analysis of The Things They Carried the book explains the reason for writing the book, the strategies involved in this style of the writing, and an account of history from the perspective of the author through personal experience.

O’Brien’s thesis centers on the moral of a war story. This thesis is made evident by splitting the book into separate individual stories (vignettes). The stories contain a common argument that O’Brien makes through the use of his characters; morality does not fit within the context of the story. O’Brien makes it very clear throughout the book that the moral of a true war story is that there is no moral. If a war story is not fowl, evil, disgusting, and retched it is not a true war story. This fact is in contrast with the fact that war in itself is fowl, evil, disgusting, and retched. One of the reasons O’Brien wrote this book is answered in an excerpt from the chapter titled Field Trip. In this chapter he revisits Vietnam with his daughter, the character Kathleen, twenty years after the end of the Vietnam War. The reason is stated by his daughter rather than from his own character’s volition, “… Some dumb thing happens a long time ago and you can’t ever forget it (183).” Although his daughter’s character made this statement, the statement can be deduced as one of the reasons for writing this book considering that it was O’Brien’s decision to include this particular conversation in the book. The statement contains a revealing quality about the author. O’Brien, as the narrator, offers an explanation that provides more insight as to the reason for writing this book; “By telling stories, you objectify your own experience. You separate it from yourself. You pin down certain truths … but that nonetheless helps to clarify and explain (158).” These statements show that O’Brien wrote this book because it is an experience he cannot forget and he still needs to provide himself with some explanation as to the reasoning behind certain events that he experienced. He wrote stories about the past to better understand them. O’Brien’s thesis and reasons for writing the book solidify his argument that a war story is immoral and the reasoning behind war is not clear.

O’Brien presents his case in a set of stories because it shows particular instances, from his point-of-view, of others experiences as well as his own. All of these experiences show the emotional aspect of something that is horrific and unexplainable. The writing itself is emotional which aids this underlying explanation. O’Brien could have stopped writing after he stated that “a true war story is never moral (68),” but those words do not resonate as loudly as the emotion behind the stories themselves. The emotion used allows the reader to feel, not just read, that war is immoral. This also helps to explain why O’Brien wrote a novel and not a non-fiction account of these experiences. Through the use of novel style writing O’Brien is able to bring the reader into the story. A non-fiction account of these experiences would have been cold, dry, and forgettable. By writing a novel O’Brien makes his unforgettable experiences just as unforgettable for his readers. 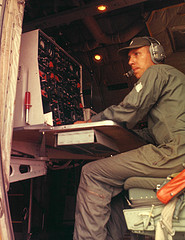 O’Brien’s rhetorical style was that of a man who was opposed to the war. Nothing could have made clearer the hatred O’Brien harbored for the war than his statement in the chapter titled On the Rainy River. In this chapter he stated, “In June 1968, a month after graduating from Macalester College, I was drafted to fight a war I hated (40).” The tone of this book contains several elements. Some of these elements include confusion, hatred, fear, and rage. These elements all have negative aspects to them, but do not have that feel when reading the book. When reading the book, the reader is able to connect with the situations described as if they were there with the knowledge that they are not actually there. The book has a surreal tone to it. The reader can identify with the emotion of the situation without being able to believe what is happening in the situation. This is the motivation of the author; to make the reader feel like he felt. The story and its truthfulness are secondary. At times the feeling is aimed at being angry or being motivated to take action, but mostly the author tries to get the reader to identify with the emotion, whatever it may be at the time, of the story they are currently reading. Many readers may feel a certain amount of disgust for most stories in the book due to extremely graphic situations and emotions the characters of the book endure.

The rhetorical strategy of the author was extremely successful. O’Brien was masterful at making the reader emotionally involved in the story through the use of his prose. The emotion O’Brien invoked in the reader was hatred for the Vietnam War. This coincides with his rhetoric which makes his strategy successful. The surreal tone helped to enhance his argument. The unbelievable situations described aided in making the reader believe in the immorality of war.

From a historical perspective, the Vietnam War was underway during the final years of World War II (WWII). Europe and much of Asia were in ruins. Due to America’s geographical distance from the fighting it emerged from the war with a booming economy. America had also become the world’s first modern super power with exclusive control over the atomic bomb. When Franklin D. Roosevelt (FDR) suddenly died in 1945, while sitting at his desk writing a speech, Harry S. Truman acquired presidential power. Truman was entirely unprepared for the complex diplomacy of the Alliance and the rising post-war pressures. Truman had little knowledge of the conference at Yalta, a resort on the Black Sea coast, which FDR attended along with Winston Churchill and Joseph Stalin. The Yalta conference allowed these leaders to reach a compromise on many important issues. Near the end of WWII, at the Postdam conference, Truman hinted to Stalin about the atomic bomb; a fact Stalin already knew. Truman never created a meaningful relationship with Stalin. The Truman Doctrine, which aided the Greek and Turkish military, was a turning point in American foreign relations. This helped facilitate the American steadfast belief in good versus evil. The Cold War was emerging. This war was a war that was fought by proxy; a war in which America and the Soviet Union would use other countries and their governments as threats to one another’s interest. America adopted a containment policy, advised by Soviet expert George Kennen, which stated that America and its European allies must contain Communism wherever it appears. Fearing the threat of the expansion of Communism the United States supported the French faction claiming control of Vietnam. After the U.S. military received fire from the North Vietnamese, President Lyndon B. Johnson authorized assault on Northern Vietnam. This escalated into the Vietnam War; although war was never officially declared by Congress. This war was the fruit of the war by proxy nature of the Cold War; an American effort to stop Communism wherever it appeared. (Professor Andy Kirk Lectures)

Reading fiction can help the reader to understand history. Fiction can contain the raw feeling of the historical event. It can help relate the truthfulness of an experience. An author of fiction can shape the story in such a way that a deeper truth or meaning, beyond a historical account, can become clear. For example, in this book there are no instances of morality which help to establish the belief of the immorality of war. In reality, there may have been instances within the war itself that were examples of personal moral behavior. If these examples were told, as would be the case with a historical account, it would cloud the overall truth that war, in its entirety, essentially is an immoral act. 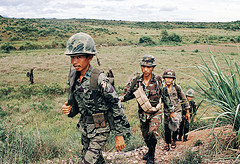 Mitchell Sanders is one of the central characters in The Things They Carried. Sanders was the Radio Transmission Operator (RTO) for Alpha Company. He is the storyteller of the Company. O’Brien uses Sanders’ character to illustrate the truths of the experiences that the soldiers had in the war and to point out the immorality of war. After every immoral occurrence, Sanders immediately chimes in to state “there is a moral here.” O’Brien uses the Sanders character to present to the reader that there is no moral to be learned from these stories, but rather to expose an experience.

One of the things they carried was “USO stationary and pencils and pens (14).” The example of carrying stationary and writing utensils represent an American experience in Vietnam filled with a longing for home. Vietnam is many thousands of miles away from the United States and was a very unpopular war even during its time. The stationary and writing utensils show a connection to a homeland and vice versa with loved ones. The author seems to use these “things they carried” as a symbol of wanting to be reunited with familiar territory. These also represent loss of loved ones as an American experience in Vietnam. O’Brien makes this clear through his writings regarding Rat Kiley writing Curt Lemon’s family to inform them of Lemon’s death.

The Things They Carried was a cleverly written fictional novel that gleaned many instances of reality. O’Brien’s writing strategies allowed the reader to feel the emotional experience of a soldier thrust into the Vietnam War. This gives the reader an opportunity to learn a personal historical account beyond facts and figures.